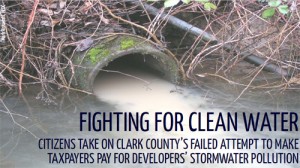 US District Judge Ronald Leighton ruled Thursday Clark County violated their Phase I Permit from August 2008 to December 2011 in what marks a landmark decision for stormwater controls in Washington State.

Most recently, in May, Judge Leighton found Clark County’s argument for modified stormwater controls “makes no sense,” as the Pollution Control Hearings Board decision was clear that Clark County’s modified Agreed Order with Ecology was “unlawful” and the Permit Modification was “invalid.”

“We are elated that our efforts to protect the environment have yielded such a positive result,” said John Felton, Chairman, Rosemere Neighborhood Association.

From the Summary Judgment ruling:

“This is a great day for counties and cities in our state that are working hard to clean up polluted waterways,“ said Janette Brimmer, attorney for Earthjustice. “We applaud the ruling for recognizing that everyone needs to do their share to protect our precious streams, rivers and salmon and that Clark County, like everyone else, must follow the law.”