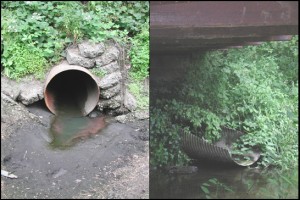 The 60-day notice letter says Clark County’s inadequate pollution standards will generate illegal stormwater pollution that will harm salmon, streams, groundwater and other natural resources.  Damage to rivers and streams from the new development will force taxpayers, rather than the developers, to pay for the impacts of urban stormwater runoff, including flooding, property damage caused by erosion, and threats to the county’s drinking water supply.

Stormwater is a toxic mix of grease, metals, pesticides, herbicides, bacteria and nutrients. When dirty stormwater runs off parking lots, buildings, and other urban development, it carries with it toxic metals, particularly copper and zinc, which harm salmon and other aquatic life. Large unnatural flushes of runoff during storm events also cause damaging erosion in streams that destroys salmon habitat and that gets worse with each additional storm.

“There needs to be a level playing field for all cities and counties,” said Earthjustice attorney Jan Hasselman, who is representing the groups.  “Every other jurisdiction in Western Washington is required to meet updated standards for reducing stormwater impacts, but Clark County got a special deal that hurts taxpayers and clean water.”
The letter emphasizes the advocate’s interest in finding solutions that don’t require litigation.  “We’re asking Clark County to come to the table to discuss what can be done to reduce stormwater pollution and comply with the law,” said Brett VandenHuevel, the Executive Director of Columbia Riverkeeper.

Earthjustice attorneys Jan Hasselman and Janette Brimmer are representing Rosemere Neighborhood Association, Columbia Riverkeeper, and the Northwest Environmental Defense Center in the notice.  Earlier this month, Earthjustice filed an appeal on behalf of these groups asking the Washington State Pollution Control Hearings board to throw out a lopsided agreement between Clark County and the Washington Department of Ecology that allowed Clark County to maintain its inadequate stormwater standards.

Federal law required Clark County to adopt new rules governing runoff from development by August of 2008. Rather than comply with Clean Water Act requirements, the county knowingly adopted a significantly weaker flow control standard for new development. While Ecology initially sought to bring an enforcement action against the county for failing to adequately manage stormwater pollution, it later agreed to let Clark County retain the insufficient standards that don’t meet the requirements of clean water laws.

For a pdf version of the 60- Day Notice, click here.