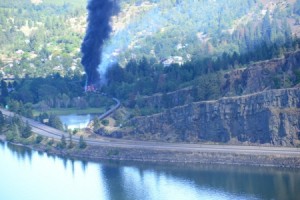 In a 2-1 vote Tuesday, Port of Vancouver Commissioners extended Vancouver Energy’s proposed oil terminal lease, ahead of the potential cancellation deadline of March 31.

Under the current lease Vancouver Energy is paying the port $100,000 a month pending a final decision by the state. The proposed $210 million Tesoro Savage Vancouver Energy terminal would bring an estimated 360,000 barrels of crude oil to Vancouver per day and has been opposed by community and environmental groups, including Rosemere Neighborhood Association, since its initial proposal nearly 4 years ago.

Eric LaBrant was the sole dissenting vote, cautioning his fellow commissioners, “Gentlemen, we’re being sold a bill of goods. We need to make a decision as a commission to move on, be done with this process, and to move on to the other things that are in store for us.”

The oil terminal is currently being reviewed by Energy Facility Site Evaluation Council (EFSEC) which is expected to give its recommendation to Washington Governor Inslee at any time. The final decision will be made by Governor Inslee.