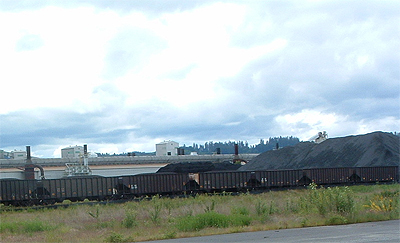 Millennium Coal’s plan was to sublease the land from Northwest Alloys to build a controversial coal terminal in Longview.

Commissioner Goldmark explained “The message of today is I’m taking steps to protect state-owned aquatic lands.  That’s part of my responsibility as commissioner of public lands.”

The company was looking to build a terminal with the capacity to export 44 million tons of coal annually to buyers in Asia. That would have involved bringing some 16 coal trains a day down the Columbia River Gorge from Wyoming and Montana. Tribes, community members along the route, and conservationists weighed in by the thousands against the project, which was first proposed in 2010. But it also attracted some support from organized labor.

The decision continues a winning streak for opponents of fossil fuel export terminals in the Northwest. Federal, state and local authorities have rejected more than a dozen proposals in Oregon and Washington to export coal, oil, natural gas and propane. There are still three proposals pending on the Columbia, including an oil export terminal in Vancouver and two methanol export terminals at the Port of Kalama and Port Westward near Clatskanie.

“This is a huge victory for tribes and communities that have fighting this proposal for years,” said Lauren Goldberg, an attorney for the conservation group Columbia Riverkeeper. “It’s an exciting way to start the new year.”

Millennium Bulk Terminals could not be reached for comment. There is no administrative process to appeal the decision, Goldberg said, though the company could sue the state.