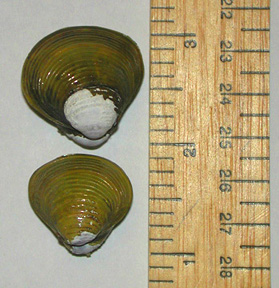 Recent water quality monitoring efforts in the Columbia River have relied upon the analysis of clam tissue to determine the levels of dangerous toxins that have been absorbed by aquatic organisms. In Vancouver, high levels of PCBs, a cancer-causing agent, have been identified in clam tissues taken from samples in front of Alcoa at the Port of Vancouver, and downstream toward the mouth of the flushing channel to Vancouver Lake. The same kind of PCBs have been identified in other studies of sediments within the flushing channel, and Vancouver Lake is listed for failed water quality standards because fish in the lake show levels of PCBs in their tissues that exceed state standards, which is a public health risk. These various studies show that the same kind of PCBs that originated from Alcoa’s pollution are found downstream (not upstream), indicating that the Alcoa PCBs may have migrated offsite and may have been transferred to Vancouver Lake.

Alcoa is currently under a state ordered cleanup plan to remove contamination it caused in the Columbia River and on Alcoa property, however, the cleanup efforts do not address any mobile pollutants that may have traveled beyond Alcoa property. Rosemere Neighborhood Association (RNA), with the assistance of Columbia Riverkeeper (CRK), has been pressing state and federal authorities to address the offsite pollution that may have been caused by Alcoa.

Over the past year, the Clark County Health Department posted warnings along the shoreline of the Columbia River near Alcoa to curb the public practice of harvesting these toxic clams. Local residents are known to collect these clams as a food source. Furthermore, the US Environmental Protection Agency (EPA) is investigating a petition submitted by the RNA to list Vancouver Lake as a superfund site because of the potential for migration of industrial toxins from places like Alcoa. The petition has been under review for over a year, and has passed preliminary analysis. EPA officials plan to arrive at Vancouver Lake in mid January 2009 to conduct field tests, and gather laboratory samples of aquatic life-forms for testing to determine how toxins are affecting Vancouver Lake and the surrounding area.

This past year, RNA and CRK collected clam samples at the mouth of the flushing channel. Lab tests run on those clam samples showed elevated levels of PCBs. Lab results from these tests were submitted to the EPA as evidence to support the Superfund petition and the theory that industrial toxins have migrated into Vancouver Lake. 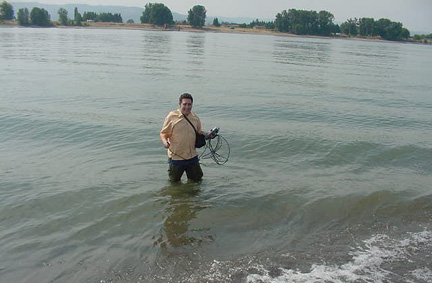 RNA has also requested the EPA to include a new species for study in the Superfund petition, the local crayfish (pacifastacus leniusculus), another important species found in the Lower Columbia River Estuary System. These local crayfish are considered one the largest and most aggressive species found in North America, and crayfish in general make up the some of the most numerous listings for endangered freshwater invertebrates in the US. Crayfish have been used to locate areas of contaminated sediments like those identified around the Island above Bonneville Dam where PCB laden waste oil was dumped.

Crayfish are gourmet menu items at fancy restaurants, and both ethnic and economically depressed communities consume both clams and crayfish. Commercial fishermen are licensed and use a set number of traps (similar to crab traps) to collect crayfish. The crayfish season extends from April 1 to October 31. 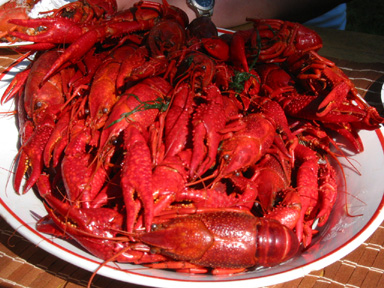 Crayfish served at a restaurant

Crayfish are scavengers and opportunistic feeders that will eat their own kind and their eggs. Since they eat rather high off the food web and live up to 4-6 years, crayfish are considered bio-accumulators and will concentrate various toxins and heavy metals in their shells and flesh. The EPA and Oregon’s Department of Environmental Quality have selected Crayfish as bio-monitoring subjects for a number of state water cleanup projects called Total Maximum Daily Loading Plans (TMDL).

The purpose of the TMDL plans is to identify the sources of contamination to our waterways, and to develop and implement strategies to remedy those pollutants. One of these local TMDL plans is currently underway on the Columbia Slough in Portland, Oregon. The Columbia Slough watershed is very similar to the Salmon Creek/Burnt Bridge Creek/Vancouver Lake Watersheds in our area. The Columbia Slough Watershed drains a larger urban area, has combined sewer/stormwater overflow problems and has various industries that contribute pollutants to the watershed.

The Columbia Slough TMDL study is monitoring heavy metals, pesticides, and other toxic chemicals using crayfish as indicators, and hopefully a similar study will be employed for Vancouver Lake where both crayfish and clams are known to exist. The RNA has submitted a request for Vancouver Lake to be awarded a TMDL study by the Washington State Department of Ecology for the next funding cycle, citing that Vancouver Lake is connected to Salmon and Burnt Bridge Creeks that already have a study in place, and that the lake is a public recreation area with public health issues at play.