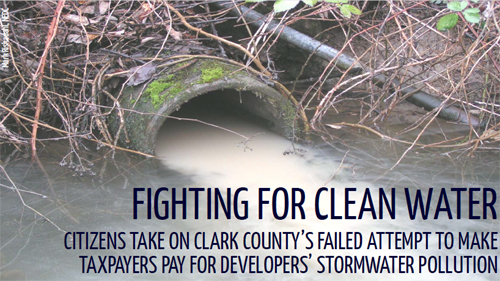 Nationwide, stormwater is the leading source of water pollution. This is also true for the Columbia River Basin. In urban areas, rain runs across dirty pavement and roofs, picking up toxic metals, oil, grease, bacteria and other contaminants along the way.

Experts across the country agree: the cost of stormwater pollution is steep. Murky, smelly streams and rivers and fish advisories warning people not to eat otherwise healthy, locally caught fish are a stark reminder of the public costs of stormwater pollution. Yet Clark County tried to make taxpayers pay for stormwater impacts that are the responsibility of private development. Taxpayer dollars already support public stormwater infrastructure and now its time for developers to pay their share.

Why is Clark County Trying to Evade Protections for Safe, Swimmable Rivers and Livable Communities?