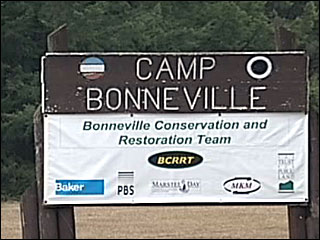 EPA has released the initial results of its testing at Camp Bonneville, the former US Military installation in Clark County, Washington.

EPA is conducting assessment of the known and suspected release of hazardous substances at Camp Bonneville to determine whether it warrants listing under the Superfund Program following a petition from Rosemere Neighborhood Association (RNA).

The first round of samples was collected last May (2011) and EPA’s report on that testing can be found http://www.epa.gov/region10/pdf/sites/camp_bonneville/bonneville-p1-sample-results.pdf.

The second round of data was collected in August (2011) and that report is expected in January 2012. Following the secondary reports, EPA will score the site to determine Superfund status upon which a final report will be released.

RNA brought the Superfund petition in 2009 citing faulty clean-up efforts at the site where live munition drills and chemical warfare had been conducted for decades. RNA contended in its petition that contamination from buried military munitions and chemicals, including the continued rise of measured perchlorate and RDX, has leached into the soil and groundwater at the site. RNA was also concerned that the plume of toxic chemicals had become mobile threatening Lacamas Creek. Lacamas Creek feeds into Lacamas Lake and ultimately into the Columbia River.

EPA’s latest data reveal – as suspected by RNA – that the plume has traveled and has become larger, possibly entering the creek flow or infiltrating below the creek to the opposite shore. Although RNA had raised these concerns to the Washington State Department of Ecology for years, Ecology officials had maintained that topography would prevent any additional test wells from being established. Based on RNA’s petition and subsequent discussions regarding hydrologic flow, EPA successfully installed additional testing wells in suspect areas that proved the plume had moved.

The danger to surrounding groundwater and surface water would have gone undiscovered had it not been for the Superfund petition brought by RNA. Following the incomplete clean-up led by Mike Gage and BCCRT, property ownership of Camp Bonneville was to go back to Clark County over a month ago, but the transfer of ownership has been stalled due to a dispute that Gage has with the Washington State Department of Revenue. All other contractors who worked on the initial phases of clean-up at the site have paid their taxes, but Mike Gage has thus far refused to pay his taxes. Apparently clean-up will be stalled until Gage’s tax dispute is resolved.

Around $28 million has been spent on the Bonneville clean-up thus far including extensive efforts to alleviate the contaminated goundwater plume. The groundwater contamination was initially caused by munitions that had been buried in landfills. The landfills were evacuated but during that process the backhoes began to sink and they were not able to remove all of the contaminated soil. As a result, much of the contaminated soil was left behind and the remaining holes were filled with porous, loamy soil that was extremely permeable and allowed the plume to become mobile.

Responding to the EPA test results announcement, Clark County Department of Public Works Project Manager, Jerry Barnett, said, “The county will meet with Ecology and the EPA to determine the significance of these results. Findings include perchlorate in sediments and subsurface water adjacent to Lacamas Creek at concentrations below cleanup levels.”

However, while EPA might agree to discuss site assessment as a process, it is premature to be discussing the “significance” of the data. As explained above, EPA management will not conduct its complete review of the data until next year after all phases of testing have been completed.

The Washington Department of Ecology also announced Thursday that it is opening a period of public review and comment on an updated legal agreement for the cleanup of Camp Bonneville. Under the proposed Amended Prospective Purchaser Consent Decree between Clark County and Ecology, Clark County will take the lead role in the cleanup of Camp Bonneville. Ecology will accept comments on the proposal from Oct. 14 through Nov. 17, 2011.

You can send comments to Ecology on the draft documents from Oct. 14 through Nov. 17.

Here’s how you can submit comments: