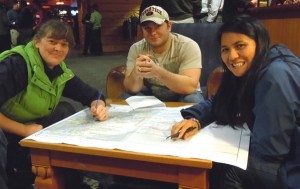 In February 2009, following Rosemere’s extensive involvement in what we consider a faulty clean up action plan at the Camp Bonneville military installation, Vancouver WA, Rosemere and Columbia Riverkeeper submitted a formal petition to the US Environmental Protection Agency to list the property on the National Priorities Superfund List.

The goal of the petition was to bring EPA back into the project in order to correct failing cleanup efforts, currently at a complete standstill. EPA had been a major participant in cleanup efforts more than 10 years ago, but in 2003, EPA withdrew its involvement citing a lack of cooperation from Clark County government, the Washington State Department of Ecology, and the US Department of Defense that owned the contaminated property. Camp Bonneville was a former 4000 acre international military training site where munitions, including missiles, grenades, and chemical warfare were used in live drills.

Documented groundwater contamination at the site has entered the Troutdale Aquifer System, a federally designated Sole Source Aquifer that was petitioned by Rosemere and Columbia Riverkeeper and established in 2006. The source of the contamination is a vast collection (both known and unknown) of buried military munitions and chemicals that have leached into the soil and groundwater throughout the site. Rosemere contends that the plume of toxic chemicals has been mobile for many years, and may have exited to compound, threatening Lacamas Creek and its tributaries, and Lacamas Lake which is hydrologically connected to the Columbia River.

Despite steady objections from individuals and organizations, the Department of Defense “dirty transferred” ownership (transferred prior to completion of cleanup, a national precedent setting transaction) of Camp Bonneville to Clark County government in 2006, with the County’s long term goal to redevelop the contaminated property as a public park. However, various sections of the park would be cordoned off with barbed wire fences since unexploded ordnance would remain on site in perpetuity. Once the property was dirty transferred, Clark County deeded the property to the Bonneville Conservation Restoration and Renewal Team (BCRRT), headed by contractor Mike Gage, to facilitate cleanup activities at the site. However, the public was well aware that the legal cleanup agreements signed by Clark County, the US Army, the BCRRT, and Washington State fell far short of what would be needed to adequately remediate the contamination on site.

After burning through the majority of clean up funds paid out by the US Army (around $23 million) Mike Gage demanded that the Army double its cleanup budget since a vast array of additional contaminant problems had been discovered or outlined, and that true conditions at the site had been withheld by the Army. The Department of Defense refused to provide any additional funding, citing Gage’s unauthorized expenditures such as the wining and dining of Clark County officials at pricey restaurants. Once the cleanup funding was cut off by the Army, munitions experts hired by Gage walked off the job, and all cleanup activity ceased. Clark County terminated Mike Gage’s contract in May of 2010 and said it would have to find a new cleanup contractor, though Clark County has not found a new contractor to date, and Gage is still present at the site.

Now that the cleanup action plan has deteriorated to the point of non-action and potential costly legal battles to be drawn out for years, Rosemere’s Superfund petition appears to be a positive action being undertaken in an attempt to achieve better cleanup levels. If awarded Superfund status, Rosemere contends that the project would achieve a higher level of cleanup with EPA at the helm.  Furthermore, Superfund status would ensure that all cleanup actions would be completed to federal standards before any type of redevelopment would be allowed to take place. Rosemere contends that current cleanup efforts employed by the state at the site are insufficient to ensure the public’s health and safety.

In May 2009, EPA informed Rosemere that the site warranted a preliminary investigation, and in March 2010, EPA announced that the preliminary investigation scored sufficiently to move the Superfund petition to the next level, a Site Inspection. On December 7-9, 2010, EPA and its private contractor, Ecology and Environment, Inc., came to Vancouver to inspect the site in person in order to help finalize the Site Inspection Sampling Plan. Over the next year, EPA’s contractor will collect and process data at the site, data which will then be used to determine if the contamination on site is widespread enough to warrant Superfund status. At this point, a final sampling plan is expected sometime in February 2011, with data collection to begin throughout that year.

On December 8th, 2010 Monica Tonel, EPA’s Site Assessment Manager assigned to the Rosemere Petition, and EPA’s contractors, met with Dvija Michael Bertish, Rosemere’s Director of Environment and Conservation, to review site inspection and data gathering plans. Ms. Tonel and EPA contractors explained that the site inspection will include the installation of in-water monitoring stations throughout Lacamas Creek, and off site for the first three stream miles to determine if waterborne contaminants are flowing from Camp Bonneville sources. Furthermore, creek sediment samples will be taken every quarter stream mile throughout the site, and three miles beyond the site boundaries, and additional groundwater monitoring wells are planned to better characterize the contaminant plume that has persisted near a former munitions landfill that was removed and backfilled under state supervision. The additional monitoring and sampling were requested repeatedly by Rosemere and others in direct meetings with Army officials over several years, but all requests were denied and rebuffed by the Army and its representatives. The additional monitoring and sampling are needed to sufficiently analyze the extent of toxic mobility at the site, and should have been performed years ago.

The continued rise of measured perchlorate at the site (at 5 to 6 parts per billion) suggests that the source of contamination has yet to be identified. EPA further explained that PBS Environmental, a local cleanup contractor, did not perform required groundwater monitoring for three previous quarter time periods. EPA has requested the most recent groundwater data from PBS Environmental.

EPA discussed sampling plans and asked Rosemere for input. Rosemere voiced concern over a vast swath the of the Central Valley Floor that has not been characterized, and the potential for additional unidentified burial pits that may contribute mobile contamination to the various streams that flow through the property into Lacamas Creek. Rosemere also voiced concerns over the failure to locate 55 gallon drums that were known to have been buried on site, the potential for radioactive materials to have been buried, and concern over buried contaminants and explosives within the planned redevelopment area.

According to EPA, Greg Johnson, a munitions expert formerly employed by the Washington State Department of Ecology on the Camp Bonneville cleanup project, has been hired by Clark County within the past month and is now working as the County’s munitions expert on future cleanup activities. The Camp Bonneville Citizen’s Advisory Board (appointed by Clark County Commissioners after the dispersal of the Camp Bonneville Restoration Advisory Board when the dirty transfer occurred) appears not to have met since February 2009, though the county advisory board was founded with the intent to meet at least quarterly to monitor the progress of the project. Also according to EPA, Clark County now appears supportive of EPA’s presence in regard to Rosemere’s Superfund Petition, and the Department of Defense has become aware of the fact that EPA is taking the petition seriously. Rosemere hopes that the Superfund Petition will provide the pathway for additional cleanup actions and adequate funding as a means to offset the lethargy that has plagued the project over the last decade.

In July 2010, Clark County took possession of Camp Bonneville under a rent-free lease that gives the county a year to negotiate a new funding agreement with the U.S. Army to continue clearing munitions of explosive concern and other contamination.

The Board of County Commissioners approved a settlement agreement with Bonneville Conservation, Restoration and Renewal Team (BCRRT), Michael Baker Jr. Inc. and MKM Engineers Inc. The county hired BCRRT and the two subcontractors in 2006 to clean up the former training post.

With a new Army funding agreement, Clark County would accept ownership of the site and use federal dollars to pay BCRRT and its subcontractors for work completed to date. The county also would hire a contractor to continue the cleanup.

If no agreement is reached by July 13, 2011, the county would not accept ownership of Camp Bonneville and the current contractors would not be released from their 2006 agreements.

Since the beginning, the county has worked to make sure Camp Bonneville is adequately cleaned so it can be safely enjoyed by county residents and that the Army pays for the cleanup without shifting costs to local taxpayers.