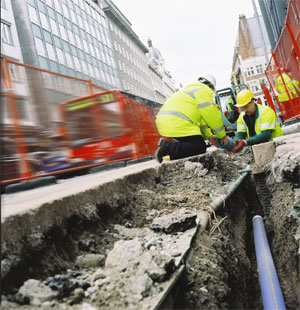 The European Drinking Water Directive of 1998 tightened overall standards for drinking water in Europe.  As a result, steps have been taken in England and Wales to reduce lead concentrations and mitigate lead poisoning in drinking water.

Lead in drinking water can cause a variety of adverse health effects. In babies and children, exposure to lead in drinking water above the action level can result in delays in physical and mental development, along with slight deficits in attention span and learning abilities. In adults, it can cause increases in blood pressure. Adults who drink this water over many years could develop kidney problems or high blood pressure.

Lead pipes were used in the UK up to the 1980s both for connecting a property to the water supply main and for internal plumbing, due to lead’s strength, malleable nature and resistance to corrosion.  In the UK, about 40% of properties are supplied via a lead pipe.  Elsewhere in Europe, the estimated percentage of properties supplied by lead pipe-work varies from 5% to 50%.

Although the rate of corrosion of the internal lead pipe wall is very small, lead dissolution into drinking water can very occasionally still reach concentrations of several milligrams per litre (parts per million), way in excess of the concentrations considered to be safe for regular ingestion (parts per billion). Lead pipes are, by far, the commonest source of lead in drinking water.

Since December 2003, a standard of 25 µg/l has been applied to the point of use by the consumer (commonly regarded as the kitchen sink tap).  In 2013, the standard in the UK will tighten to 10 µg/l.

Two methods are currently being employed to reduce lead in drinking water in England and Wales.