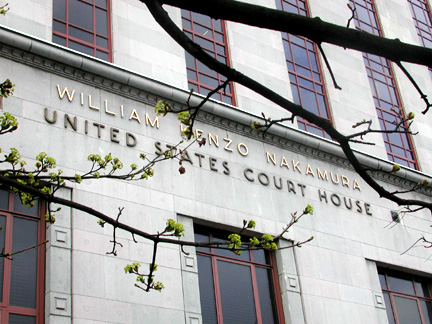 On April 14, 2009, oral arguments were made in the Rosemere Neighborhood Association’s (RNA) appeal in its federal lawsuit against the Environmental Protection Agency (EPA) for failure to conduct an appropriate investigation into allegations of retaliation.  RNA filed a Title VI Environmental Justice complaint with EPA in February 2003 alleging that the City of Vancouver had discriminated in the provision of municipal services in violation of the Civil Rights Act of 1964. Specifically, the Title VI complaint alleged that the city had discriminated against Environmental Justice neighborhoods by failing to address failing septic systems, the lack of a comprehensive sewer network, contaminated ground and surface waters, poor air quality, industrial pollutants, urban blight and decay, and long-range planning that fails to alleviate these stresses. RNA contends the EPA failed in its fiduciary duties to properly investigate the Title VI complaint which has led to ongoing legal proceedings.

Chris Winter, the RNA attorney for the case, appeared in United States Ninth Circuit Court of Appeals in Seattle, before the panel of three appellate judges: Betty Fletcher, Sidney Thomas, and Wallace Tashima.   Rebecca S. Cohen, Esq., was the US Attorney representing the EPA.

The judges indicated that RNA’s case was very clear, that EPA’s performance does not encourage confidence in the Title VI program, and that EPA cannot provide assurances that it can correct and improve its performance as stipulated in regulations which specify investigative timelines.  RNA argued that EPA’s failures are systemic and that groups all around the country have suffered from a comprehensive lack of EPA responsiveness to Title VI complaints for many years.  RNA asked for a declaration from the court that EPA’s behavior shows a pattern and practice of delay which is illegal, and asked the court for relief in order for RNA to use the Title VI process with confidence in the future.  Prior to the proceedings, Mr. Winter explained that one of the goals of the case is to put pressure on EPA to ensure compliance and improvement in the Title VI program.

It is unknown how long it will take for the court to issue a ruling — it can take a few weeks, a few months, or more than a year.  If RNA receives a favorable ruling, the case returns to the US District Court of Western Washington.

To hear a complete audio file of the proceedings, click here:

RNA first filed a Title VI complaint with EPA in February 2003 alleging that the City of Vancouver had discriminated in the provision of municipal services in violation of the Civil Rights Act of 1964.

Shortly after RNA submitted the original Title VI complaint with the EPA, the City began an unprecedented investigation into the internal operations of RNA. Within a year’s time, the City Council held a public hearing to revoke RNA’s status as an “officially recognized” neighborhood association. RNA alleges that the City disenfranchised RNA as retaliation for its environmental work.  EPA’s Title VI regulations prohibit the recipients of federal funds (like the City of Vancouver) from retaliating against parties that invoke the Title VI process.  In response to the City’s sanctions, RNA filed a second Title VI complaint with the EPA in December 2003 alleging retaliation by the City of Vancouver, noting that this retaliation caused RNA to sustain damages.

In February 2007, RNA filed a secondary federal lawsuit against EPA for its failure to conduct an appropriate investigation into the allegations of retaliation. This case was heard in Tacoma’s US District Court of Western Washington. Within weeks of filing this second lawsuit, EPA produced an investigative report in which the EPA’s Office of Civil Rights (Washington DC) determined that a prima facie case (A prima-facie case is a lawsuit that alleges facts are adequate to prove the underlying conduct supporting the cause of action) of retaliation had been established. EPA further explained that the investigation raised concerns about the city’s compliance with procedural requirements by recipients of federal funds, and that the City’s behavior was “suspicious” toward RNA. The EPA admits that the issuance of its investigative report was delayed because the original case manager in charge of the investigation was replaced due to the fact that he had shown a bias against RNA.  A second investigation had to be initiated without relying upon any of the information generated by the first case manager.

In spite of these findings, EPA dismissed RNA’s complaint of retaliation. It is extremely rare for the EPA to find in favor of the complainant, and research shows that EPA has failed to investigate any Title VI complaints over the past few years within the regulatory timelines. Some Title VI complaints have not been properly investigated for many years. Furthermore, at this point, the EPA had not even generated internal policies or procedures to ensure compliance.  The secondary lawsuit was dismissed by the court as “moot” since EPA finally issued an investigative report, though it was delayed by years.

In January 2008, RNA filed an appeal of the US District Court decision, citing that the EPA failed to address the environmental stresses brought before the agency, and citing that EPA’s administrative failures did not address the alleged retaliation. Now, in April 2009, the appeal is being considered by the three appellate judges.

The Rosemere Neighborhood Association is an independent non-profit organization which pursues environmental protection.

Click on the links below to view briefs filed in this case: