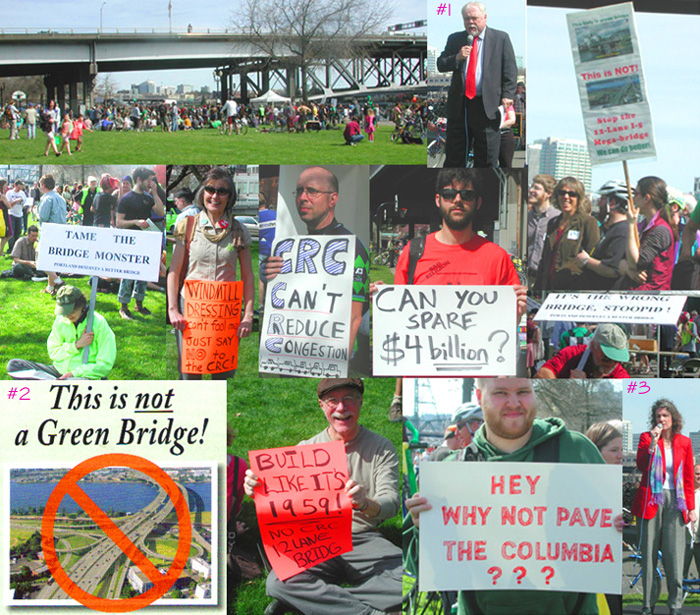 It was the perfect day for a rally, the first nice spring day in the region. It took place at the noon at Tom McCall Waterfront Park in Portland amidst freshly sprouted lawn, trees starting to blossom, a sunny blue-sky day, and a busy promenade with bicyclists, strollers, and roller skaters. Television crews buzzed about as the stump speeches began beneath the Hawthorne Bridge. Sponsors of the rally included the Bicycle Transportation Alliance, Coalition for a Livable Future, 1000 Friends of Oregon, Upstream Public Health and Oregon League of Conservation Voters. Speakers included Washington Senator Don Benton, Portland City Commissioner Amanda Fritz, and Former Oregon Secretary of State Bill Bradbury.

The purpose of the rally was to kick off opposition to the proposal to build a 12-Lane Mega Bridge to replace the current I-5 Crossing over the Columbia River. The 12-lane “preferred alternative” was decided upon by transit authorities, city councils and commissions in both Vancouver and Portland without a public vote. Opponents of the 12-Lane bridge design say they want to pursue alternatives that are fiscally responsible, and alternatives that address environmental impacts and livability along the transit corridor. Opponents say the Mega-Bridge is far too expensive, that it will not alleviate traffic congestion once it is built, and that it will harm the environment.

Last Year the Rosemere Neighborhood Association (RNA) submitted technical comments to the Draft Environmental Impact Study for this project that drew attention from the EPA relative to Environmental Justice concerns. RNA members also testified at public hearings held by the Columbia River Crossing Project (CRC). To date, CRC officials have not responded to the technical comments provided. RNA’s concerns include adverse impacts to identified Environmental Justice neighborhoods in the construction zone, carbon dioxide emissions in these neighborhoods and impacts to asthmatics, impacts to sensitive wetlands and troubled waterways that fail water quality standards, the lack of financial data to determine the monetary impacts this project will have on lower income families, the failure of the CRC to personally notify property owners that might become subject to eminent domain and lose part of all of their property to the project, and adverse impacts to residential neighborhoods with the introduction and construction of light rail in Vancouver. The project falls within the federally designated Troutdale Sole Source Aquifer System, and construction plans call for fish kills, de-watering of the Columbia River, deep drilling to build bridge footings, and injecting directly into the aquifer.

EPA has been meeting with CRC officials to discuss these (and other) Environmental Justice issues. EPA was surprised to hear last week that the CRC had not provided answers to RNA’s comments and had not even contacted RNA to discuss the issues raised. EPA suggested that RNA contact CRC staff directly to get answers without waiting for the release of the Environmental Impact Statement. According to EPA, the technical comments submitted have catalyzed additional data by CRC staff that will be included in the final Environmental Impact Study.

One speaker for the Bicycle Transportation Alliance announced her organization’s formal opposition to the 12-lane Mega Bridge, and that it rejected the rumor that the Mega Bridge design was a powerful “done deal” that could not be reversed. The Alliance seeks alternatives that will not “degrade the quality of our community,” noting other major transportation projects (such as the Hood River Highway) that have been derailed in the past by intervention from petitioners.

Washington State Senator Don Benton attended the rally representing Clark County voters and said that Clark County residents who work in Oregon already pay income tax to Oregon, and should not have to pay an additional $150 to $200 million per year in tolls to cross the Columbia River, tolls that will only go to pay bridge contractors. Benton also stated that the costs of the bridge project have been underestimated at $4.2 billion, and that the actual cost could be as high $6 billion. Furthermore, he pointed to facts gathered from the CRC that travel times across the new bridge would increase significantly post construction, and that the project will not alleviate congestion. Benton claimed the I-5 widening project at Delta Park will do more to open bottlenecks and congestion than building the Mega Bridge, and he referred specifically to choke points such as the one at Portland’s Rose Quarter that cause traffic jams on a daily basis. Benton emphasized that the key to the traffic problems on the I-5 corridor was to fix the bottlenecks, and that a different solution was needed instead of the Mega Bridge, statements that received cheers and loud applause from the crowd.. Benton also alluded to a Washington Senate Bill 5540 as a legislative contrivance designed to limit the public’s ability to vote on transportation issues by creating smaller voting districts, and he urged concerned citizens to contact Senator Frank Chop at 360-786-7920.

The Association of Oregon Rail and Transit Advocates circulated pamphlets that urge citizens to contact their Councilors and Commissioners and to voice opposition to the Mega Bridge proposal. The Association calls for improvements to Rail Infrastructure to improve rail capacity in the region, to build a new bridge for local and pedestrian/bicycle access to and from Hayden Island, and to upgrade the structure of the existing I-5 Bridge to meet seismic standards.