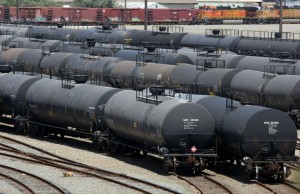 As we have reported, this August 1st marks the deadline for the Port of Vancouver to renew the lease for the Tesoro Savage Oil Terminal.

Tesoro Savage has approached the Port with a proposed 2-year extension to renew the lease prior to the August 1 deadline. The Port’s staff, although still on record supporting the Tesoro project, recommends against the lease renewal, citing growing concerns with the terminal moving forward.

A quite different slate of Port Commissioners will vote this time compared to those on the commission in 2013 when the lease was first approved after massive public opposition.  With the addition of Eric LaBrant last year, a staunch opponent to the terminal, the three Port Commissioners are now divided in their support.  Commissioner Brian Wolfe is also now voicing his own concerns with the Tesoro project.

Wolfe, who has become the three-member commission’s swing vote on the oil terminal lease changes, said he won’t make up his mind on his vote until after Tuesday’s daylong public hearing at Clark College’s Gaiser Hall. The commission expects to vote on the request on April 15.

“My position today is I’m still going to listen to everybody next week and try to do at the end of the week what’s best for the Port of Vancouver,” said Wolfe, who backed the initial lease agreement.

Eric LaBrant was not a member when the commission unanimously approved the original lease in 2013. But he won his seat on an anti-terminal platform, easily beating a staunch terminal supporter. Commissioner Jerry Oliver remains a supporter of the terminal.

Rosemere Neighborhood Association encourages everyone to attend the Public Hearing this coming Tuesday; voice your opposition to the terminal; and urge the Port Commissioners to not only reject the lease renewal proposed by Tesoro Savage, but to cancel the lease outright.

Read the Agenda for the Port’s April 12 Meeting, including the full Lease Amendment Proposal between the Port of Vancouver Tesoro Savage here: Agenda-and-documents-for-April-12-2016-Commission-Meeting.pdf

Here are the Public Hearing details: