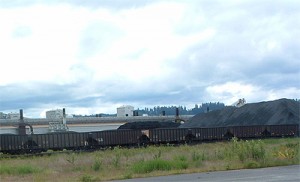 On June 19, 2012, Rosemere Neighborhood Association submitted a letter to Vancouver Mayor, City Council and City Managers asking the City of Vancouver to join in the efforts by Governor Kitzhaber and Senator Patty Murray to call for a regional Environmental Impact Statement regarding the doubling of international coal exports through the Pacific Northwest. Seven mega coal terminals are proposed to ship 157 million tons of coal annually to China. The coal trains will flow daily through Vancouver, spewing toxic residue with each train.

Excerpted from the letter, which was presented at Vancouver City Council meeting, Monday, June 25, 2012:

Facing the slowing of U.S. coal fired power plants, coal companies like Massey and Arch Coal are looking to harvest and ship an additional 157 million tons of coal per year, sending 30 – 60 trains per day through the Columbia River Gorge via Portland and Vancouver, where it is intended to be shipped to Asia. Each and every car from a coal train can unleash 500 pounds of coal dust. The coal trains proposed to run through Portland and Vancouver will be 75 miles long, each day making the Pacific Northwest the largest coal chute in the nation, originating in Montana’s Powder Ridge Basin. There are various international coal export terminals proposed for Oregon and Washington, and should they proceed unabated, the health and environmental impacts to our region and our way life will be substantial.

To view the letter in its entirety: Coal to City Council