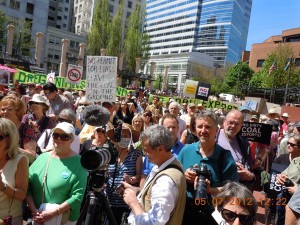 The Power Past Coal Rally began at noon on a bright, sunny, spring day with a chant from various members of the Riverkeeper Alliance: “Clean Coal is a Dirty Lie!” 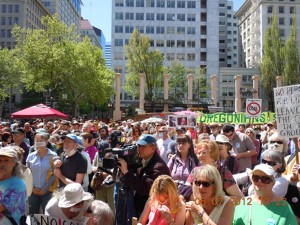 Columbia Riverkeeper, Sierra Club, Climate Solutions and Greenpeace sponsored the Power Past Coal event with Robert F. Kennedy Jr., Environmental Attorney and Chairman of the Waterkeeper Alliance, as the featured speaker. Kennedy, who has been working against coal for more than 30 years, has been dubbed “Hero of the Planet” by Time Magazine.

Facing the slowing of U.S. coal fired power plants, coal companies like Massey and Arch Coal are looking to harvest and ship 150 million tons of coal per year, sending 30 -50 trains per day through the Columbia River Gorge via Portland and Vancouver Neighborhoods, where it is intended to be shipped to China. Each car from a coal train can unleash 500 pounds of coal dust. The coal trains proposed to run through Portland and Vancouver will be 75 miles long each day making the Pacific Northwest the largest coal chute in the nation, originating in Montana’s Powder Ridge Basin.

Toxins emanating from the transport and burning of coal include mercury, arsenic, lead, sulphur dioxide, and ozone among 50 known contaminants. Health impacts, especially for young children, include mental retardation, impacts to speech and gait, lung and liver damage, autism and blindness. Estimates show that 300,000 to 600,000 children are exposed to high levels of mercury each year stemming from the coal industry. Coal emissions also exacerbate asthma, emphysema, can cause cancer, and contaminate rivers and fish, and can also reduce rainfall and snow pack caused by climate change. Just last week, Portland General Electric opposed the placement of a coal terminal near its power plant because dirty coal would hamper plant operations, and Oregon’s Governor Kitzhaber requested a regional Environmental Impact Study to identify public health and environmental impacts expected from seven proposed coal terminals in Oregon and Washington State.

Toni Montgomery, a grandmother in Vancouver, Washington, explained that two to three coal trains already roll past her house each day, only 100 feet from her back door on their way to the coal plant in Centralia, and then onto power plants in Canada. Ms. Montgomery explained that the coal dust kills plants and trees in her yard, turns her patio black every day, and destroys salmon spawning grounds that have been protected in the area.

Hao Xin, from the Qiantang River Waterkeeper in China, received shouts of approval from hundreds in the crowd when he exclaimed “China is not be the dumping ground for dirty U.S. Coal. We stand with you fighting for clean energy, clean water, and clean air.” 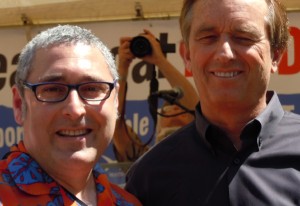 Kennedy began by saying that “Coal is Crime. Wherever it comes, it’s toxic. It is the enemy of our country and everything we stand for. It poisons our values, our democracy, our land, and our people.”

Kennedy says he has 10 times the safety level of mercury in his body due to the fact that he eats a lot of fish, and that all fish has been contaminated with mercury from coal. A woman with Kennedy’s level of mercury in her body would bear children with certain cognitive impairment, and IQ loss of five to seven points. The Center for Disease Control states that one out of every six women currently has dangerous levels of mercury in their womb.

Kennedy outlined a litany of sobering coal related facts. All Pacific Northwest salmon have dangerous levels of mercury in their flesh caused by coal based emissions from China. The ozone damage caused by the coal industry costs the U.S. $345 billion annually, and 65,000 people die annually from breathing in coal dust. One fifth of all the lakes in the Adirondacks are sterile from acid rain caused by emissions from the coal industry. Coal mining uses the equivalent of the Hiroshima bomb every week to blow up mountains in order to harvest coal. Coal industry lobbyists were successful in changing the Clean Water Act making it legal for the coal industry to dump debris, garbage and gravel in rivers and streams without a permit. Eighty-five percent of the residents of West Virginia want to end mountaintop coal removal mining, but the coal industry has tremendous influence over elected officials in that state that allow the coal industry to continue to pollute without hindrance. Giant 22-story machines literally chew up the purple mountains of Appalachia. Coal poisons groundwater and makes communities unlivable. Without huge government subsidies, the coal industry cannot compete in a free market because of catastrophic expenses.

Kennedy remarked that the number of regional jobs to man the proposed coal terminals would equal the same number of staff required to run two Starbuck’s coffee shops, and that such a small number of jobs is not adequate to offset negative health and environmental impacts.

Millennium Bulk Terminals in Longview, Washington has applied for permits to make it one of the largest coal exporters in North America. Rosemere Neighborhood Association, working with citizen partners, challenged Millenium’s operations last year and achieved a settlement to advance protections from coal impacts at the facility. 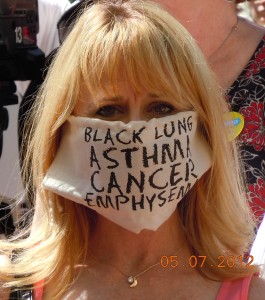 The Power Past Coal campaign, supported by various organizations is working to stop the advances of coal in the Pacific Northwest. Kennedy said that the Portland area has the highest quality of living in the nation, and that it is up to the people of the region to push the coal industry out in order to protect our way of life. He stated that the wind and solar industry already surpass the coal industry in the U.S. with the number of workers, and that he helped to build the largest solar power plant in southern California, that will produce the same amount of energy as a coal fired power plant, but without the staggering costs to operate and maintain, and without impacts to human and environmental health.

Read more about the rally, including a video and more photos, on Columbia Riverkeeper’s website: http://columbiariverkeeper.org/featured/huge-rally-big-success/