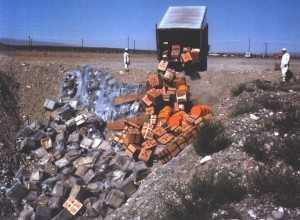 The Federal Government is attempting to make Hanford a national nuclear waste dump, despite the actions of the Washington citizens to prevent more nuclear waste from being shipped there. In recent months, the reactor had numerous safety violations. As the Seattle Times reported (March, 2011), Energy Northwest officials have been moving to be the first commercial reactor in the US to use the same highly dangerous Plutonium fuel which was released to the environment during the Fukushima Reactor earthquake and tsunami crisis, causing catastrophic damage to a huge populated area of Japan and the ocean – without public disclosure of risks or costs.

Clark Public Utilities representatives have not objected to use of Plutonium fuel, and supported relicensing the reactor to run 20 more years until the year 2043 – without any public discussion near Clark PUD.

You can voice your opinion.

Clark County residents: Click on the link below to sign a petition (managed by Heart of America Northwest, www.hoanw.org) to stop the licensing of the nuclear reactor operating at the Hanford facility, and demand the federal government pursue clean energy instead: