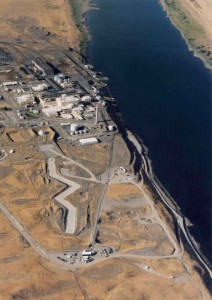 On April 29, 2010, a coalition of Northwest environmental and public health groups, including the Rosemere Neighborhood Association, sent a letter to the U.S. Secretary of Energy, Steven Chu, urging him to withdraw the Department of Energy’s decisions to use Hanford, WA, as a national radioactive waste dump.

“that the U.S. Department of Energy (DOE) withdraw its 2000 and 2004 Records of Decision selecting Hanford as a disposal site for large volumes of radioactive low-level waste (LLW) and mixed low-level waste (MLLW) from across the Nation.  The Department’s own draft Tank Closure and Waste Management Environmental Impact Statement (TC&WM EIS) clearly demonstrates that importing and burying off-site waste at Hanford poses serious human health and environmental impacts.

We join the State of Oregon Department of Energy’s formal request, submitted to the Department on March 23, 2010.  Oregon’s letter discusses both the impacts and the flawed process relied upon by DOE in issuing a Record of Decision before analyzing the impacts at Hanford from importing and disposing of off-site waste.

Against this backdrop, we urge DOE to:

a)    withdraw its prior decisions selecting Hanford to dispose of off-site waste;
b)    issue a new formal decision that DOE will not add more waste to Hanford;
c)    commit that DOE will conduct a new environmental impact statement if DOE revisits this decision after 2022; and
c)     commit to issuing a new, revised draft of the TC&WM EIS for public comment which does not propose adding off-site waste and cures the numerous defects in the current draft, as the Department was advised by its Hanford Advisory Board (March 4, 2010).”

Signing the letter to Secretary Chu are the following prominent Northwest environmental and public health organizations:

The Rosemere Neighborhood Association recently acquired the transcript of this public hearing.

To view the transcript in its entirety (105 page document in pdf format), please click here.