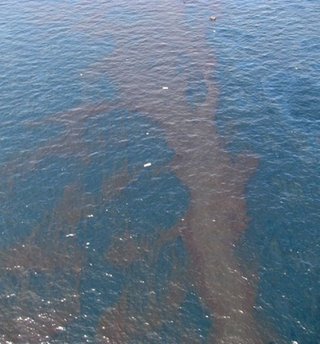 Damage assessments of the oil spill off the Louisiana coast continue to mount as the spill now threatens 4 states and is said to be growing at 5 times the rate it was originally measured.  More than 200,000 gallons a day is pouring out from the sunken oil rig and threatens coastal nature preserves, parks, fisheries, and the health and livelihood of residents.

NEW ORLEANS — Time appeared to be running out
Thursday to prevent a disaster that could harm the
ecosystem along the Gulf Coast as 210,000 gallons
of oil has leaked into the water every day since an
oil rig exploded and sank last week.

Officials from British Petroleum, the oil company
which operated the rig, to the Pentagon, Department
of Homeland Security and Environmental Protection
Administration scrambled to figure out how to
contain the massive spill after a third leak was
discovered Wednesday and oil crept within 12 miles
of the coast.

In a news conference, Homeland Security Secretary
Janet Napolitano called the disaster a “spill of
national significance.” That allows the federal
government to mobilize additional resources along
the coast and to centralize communication. She said
1,100 people were working to contain the spill and
that 685,000 gallons of oily water had been
collected so far.

See the full story and video footage at http://www.usatoday.com/news/nation/environment/2010-04-29-oilspillupdate_N.htm

At current figures, this disaster comprises nearly 1.5 million gallons of spilled oil into the Gulf.  By comparison, around 11 million gallons of crude oil was spilled from the Exxon Valdez into Prince William Sound, Alaska in 1989.