Thursday, October 22, marked the 5 year anniversary of the Vancouver Lake Watershed Partnership, created to address longstanding problems that prevent the lake from being swimmable and fishable, including toxic blue green algae.

Patty Boydon, Port of Vancouver Environmental Director, gave a presentation on the installation of an air stripping facility installed to remediate toxic groundwater plumes produced by Cadet/Swan Manufacturing. Groundwater plumes that have expanded into the Fruit Valley Neighborhood were caused by the use of industrial chemical solvents. The shallow groundwater plumes were first discovered in 1998 during road construction, marking the largest groundwater cleanup in Washington State.

Because the Vancouver Lake lowlands are a top regional priority for future development of high yield drinking water wells by Clark Public Utilities, the Port has stepped up cleanup efforts with a mechanized pump and treat system. Clark Public Utilities well facilities will be pumping groundwater for public consumption just north of the plumes.

Since the discovery of the plumes, the Port has performed over 300 groundwater sampling tests, and has also tested over 200 households in Fruit Valley for toxics. Six homes in Fruit Valley were fitted with Soil Vapor Vacuum Systems to treat chemical vapors emanating from the plumes. The Port also installed eight circulating groundwater wells and various monitoring sites.

In 2002, the plumes contained more than 5000 parts per billion of contaminant. To date, the majority of the plume contains less than 5 parts per billion, and the Port states there are now clean zones where the plume once showed dangerous contamination. The newly constructed air stripping facility, completed in June 2009, is a vast 36 inch extraction well drilled to 120 feet with pipes that are 2 inches thick to handle mass volumes of pumped groundwater from a very rich and active aquifer.

Since June 2009, the air stripping facility has processed 276 million gallons of groundwater and the following toxicants were removed: 88 lbs. TCE, 37 lbs PCE, 138 lbs. Total Volatile Organic Compounds. The system processes 3.6 million gallons of water per day through 2 towers that are filled with 200,000 plastic spheres. Groundwater is pumped to the top of the towers where it cascades through the plastic spheres, and forced air shoots some of the toxics out of the top of the towers into the air. The towers also sift the toxics into collection bins.

The facility operates under a Southwest Washington Clean Air Agency permit, and the Port states that it is operating far below permit limits for airborne expulsion. The facility is operated by a private contractor, and will be treating the groundwater plume for decades. Air quality is monitored weekly for the first 3 months of operation, then monthly for the duration of operations. Groundwater monitoring wells are sampled quarterly or bi-annually to plot the progress of the remedial efforts. Records show the plume to be decreasing. 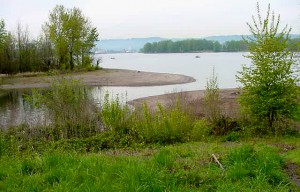 A second presentation was provided by Tonnie Cummings, Washington State Department of Ecology. The States Environmental Assessment Program has begun a study to try to detect chlorinated pesticides, PCBs, dioxins & furans in major surface water inputs to Vancouver Lake. Sampling will begin within the next few weeks and will include fall, winter and spring monitoring using new membrane filtration techniques. Sampling stations will be located in the Flushing Channel, Burnt Bridge Creek, Lake River and maybe Salmon Creek to determine where toxics are entering Vancouver Lake. An initial report on the data may be available by fall 2010.

Membrane filtration devices are left within the stream flow for a month’s time, after which they are removed and analyzed for concentrations of collected contaminants. When asked what will happen if the report detects contaminant spikes, Ms. Cummings reiterated that this was only a pilot study, and that no cleanup plan would be forthcoming as a response to the pilot data.

Ecology’s pilot study follows an EPA Superfund Preliminary Assessment for Superfund petitioned by Rosemere. For reasons unknown, EPA’s initial sediment analysis failed to detect any PCBs in Vancouver Lake sediments, even though 4 other documented studies did identify PCBs in the area. EPA agreed to re-analyze the sediment samples and attempt to locate clams for tissue analyses. Clams bio-accumulate PCBs in their tissues, and they make good indicators for the presence of toxics. Rosemere has repeatedly voiced the concern that PCB contaminants migrated into the Vancouver Lake system from PCB hotspots found in the Columbia River at the defunct Alcoa smelting facility. EPA will be conducting additional studies at Vancouver Lake this fall.

Meanwhile, toxic blue-green algal blooms have appeared in nutrient rich and stagnant waters throughout the region, including Vancouver Lake, Lacamas Lake, and various lakes and reservoirs in Oregon. Blue-green algae, called cyanobacteria, produces toxins harmful to people and animals. Algal blooms appear like a foamy or scummy mat in the water.