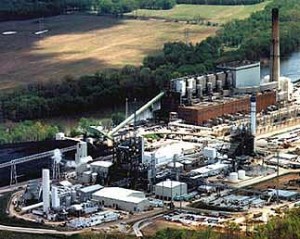 This is a 2544-ton-per-day coal gasification plant on the Wabash River in Indiana. (Photo: Department of Energy)

Energy Northwest has withdrawn its application for the Pacific Mountain Energy Facility (PMEC) in Kalama.  In a letter this month to the State of Washington Energy Facility Site Evaluation Council (EFSEC), Energy Northwest explained its decision saying, “Our efforts have determined that the financial and economic conditions do not support a project of this size.”

In the fall of 2007, the six environmental groups along with the WA Attorney General and Department of Ecology were granted the legal status to intervene in the permitting process for Energy Northwest’s proposed coal-fueled plant in Kalama.  Those efforts paid off in September 2008 when Energy Northwest announced the change to natural gas for the facility.  Click here for more on that story.

“There was that local fight going on, but the state decision to move away from coal-fired electrical generation was the final nail in the coffin,” VandenHeuvel said.