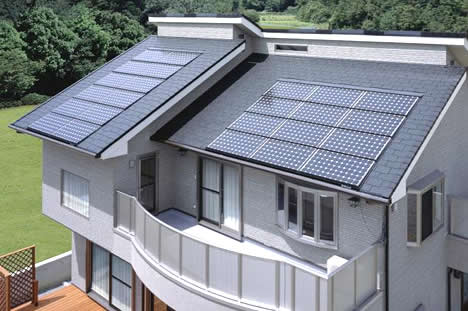 Advancement for solar energy was attained in 2005 by the State of Washington.

“This is the most important solar legislation ever introduced in any American state legislature.”
- Denis Hayes, founder of Earth Day, former director of the federal Solar Energy Research Institute and current President of the Bullitt Foundation

Washington State Senate Bill SB 5101 provides consumer credits for installing small scale solar power systems connected to the grid. Homes and businesses with solar photovoltaics, wind power systems or anaerobic digesters can earn 15 cents per kWh of electricity generated by their renewable energy systems. If the system’s components are manufactured in Washington then the incentive increases to as much as .54 cents up to a cap of $2,000 annually. Renters who install systems are not eligible for the program. This credit expires on June 30th, 2014.

Washington State Senate Bill SB 5111 provides incentives for solar manufacturers to set up business in the State of Washington. If the businesses locate themselves in an economically depressed area, then they will receive a higher tax break.

Up until 2011 solar products purchased in the state will be sales tax exempt to WA residents.

In addition to WA state incentives, there is a Federal tax credit that will be available for up to 30% of installation costs after Jan. 1, 2009-2016. For more information about the Federal incentive see http://www.energytaxincentives.org. Keep on the lookout for more Federal programs initiated by president elect Obama, who has publicly supported development of wind & solar energy.

With legislation clearing a path to gain momentum, you would think that alternative energy systems would be proliferating in your neighborhood. When we checked with Clark PUD, who offers alternative energy incentives, they said that they have not seen a sizable increase in solar installations since the 2005 rulings.

A large part of the problem seems to be in the high initial investment for the system. We received quotes for a roof installed solar photovoltaic system for a 1,200 sq. ft. ranch home. The estimates ranged from $65,000 to $75,000 for a system that could supply up to 80% of household energy needs. The way the WA state incentive works, the consumer has to pay for the entire installation but can receive annual payments for energy sent to the grid. In the past, California has offered up front rebates to defray installation expense which has generated controversy. Some say that once owners received their rebates, they did not maintain and update their systems for maximum energy production. WA contends that their system of only paying for energy sent to the grid discourages inefficient systems.

Despite WA state efforts to lure solar manufacturing, it recently lost Solarworld’s massive expansion to Hillsboro, Oregon. The Vancouver plant is hanging on for as long as they can with about 100 employees, while the new Oregon plant plans to add 1,000 new jobs by 2010. The Oregon Business Energy Tax Credit was more appealing than what WA could offer.

Are there resources for coming up with the pile of cash needed to launch your solar project? Current inquiries have come up empty for WA resident grant monies. We have been told that in the near future local banks will be offering low interest loans for renewable energy systems. For the moment, you will have to find a conventional loan or squirrel away your savings. Keep in mind that you will be able to get some of that money back when you file your Federal income tax return, provided you filled out all of the required paperwork.

* Submit a form to the Washington State Department of Revenue that will be forwarded to the Climate and Rural Energy Development Center at the Washington State University. (Form is here.) Note: you can qualify for an accelerated kilowatt credit multiplier (up to .36/KwH up to $2000 a year) if you use equipment manufactured in the state of WA.

* You will find out if your system qualifies for the incentive program within 30 days. If you are granted entry into the program, it is for one year only. You have to submit a new application with the previous year’s documentation of kilowatt-hours each year you want to participate in the program. Once you fill out the year end documentation forms, you will find out if you qualify for the incentive payment within 60 days.

Here are some more legislative updates from The Tax Incentives Assistance Project: http://www.energytaxincentives.org/ (reprinted here with their permission)

On Oct. 3, 2008, the President signed into law legislation to extend many of the Energy Efficiency Tax Incentives first enacted in 2005 but that expired at the end of 2007 or that were scheduled to expire at the end of 2008. The bill also includes extensions of a variety of renewable energy tax incentives. The energy efficiency provisions include:

The bill pays for these provisions by restricting several oil and gas industry tax breaks, and tightening some provisions on the sale of stocks. Watch for specific updates throughout the site in the coming weeks.

For more information, see these links:

Other helpful and interesting links for solar energy, etc.