(Daily News from InsideEPA.com – February 18, 2009) EPA’s waste office is placing a high priority on finalizing a controversial munitions cleanup policy following months of waiting for the White House Office of Management & Budget (OMB) to address objections raised by the Defense Department over it. The renewed attention to the pending policy for former ranges may signal stepped-up scrutiny from EPA over munitions contamination matters — considered a major cleanup liability for DOD.

Despite the holdup of the document at OMB, an EPA spokeswoman says finalizing the agency’s munitions response guidelines, first floated as a draft document last February, is a “high priority” for EPA’s waste office this fiscal year.

After DOD raised objections to the guidelines last spring, EPA voluntarily sent them to OMB for interagency review “to ensure widespread opportunity for comment throughout the federal government,” an EPA spokeswoman said at the time. At the time, EPA said it planned to finalize the document in the summer of 2008. But OMB never provided a response to address DOD’s objections, and EPA did not move on the document. OMB could not be reached for comment by press time. 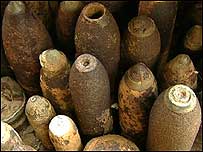 Now, however, EPA is calling it a priority for its Office of Solid Waste & Emergency Response. The EPA spokeswoman says in a written response to questions that the agency is “developing a schedule to reach closure and finalization.” EPA staff had suggested finalizing it as is under the Bush administration, but Bush EPA waste chief Susan Bodine “wouldn’t go for that,” says a defense source familiar with the issue. Bodine left her position at the end of the Bush administration. No one has been named as her successor.

The guidelines are meant to compile what the agency has said is its long-standing policy on munitions cleanup for former ranges. According to the Feb. 27, 2008, draft document, the guidelines would address properties that include non-operating ranges on formerly used defense sites (FUDS), BRAC sites and such ranges on active bases, as well as scrap yards, disposal pits, former ammunition plants and open burn units and former research facilities.

The draft document says the guidelines offer “a framework” to regional offices overseeing munitions cleanups on locations other than operational ranges. They build on existing EPA/DOD principles for implementing response actions at such non-operating ranges, outlined in a document dating back to 2000, according to the draft. The draft guidelines list a number of areas they address, including general regulatory authorities; use of the Comprehensive Environmental Response, Compensation & Liability Act (CERCLA), Resource Conservation & Recovery Act (RCRA) and other authorities; state, tribal and public involvement; explosives safety principles; site characterization principles; transferring ranges; land use and institutional controls; and enforcement principles. 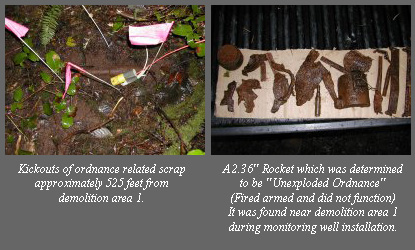 While sources have not revealed details of DOD’s concerns, EPA and DOD have long disputed munitions cleanup issues, and the draft document includes some issues over which the military and EPA have disputed in the past. For instance, the document cites EPA’s authority to issue unilateral orders to compel cleanup under CERCLA, RCRA, and the Safe Drinking Water Act (SDWA) if imminent and substantial endangerment is present. But in recent years, DOD has been engaged in a lengthy dispute over EPA’s use of RCRA and SDWA authority to enforce cleanup orders at military Superfund sites. That issue, however, may have been put to rest this past December when the Justice Department told DOD it backs EPA’s authority to issue such orders under RCRA or SDWA.

The draft guidelines also note that munitions constituents and certain explosives in areas not deemed operational ranges are “hazardous substances” under CERCLA and that such substances are RCRA hazardous waste if, following a review of records, they meet the waste listing description in federal regulations or exhibit a characteristic of ignitability, reactivity, corrosivity, or toxicity.

In the past, the Army Corps has argued to state regulators that unexploded munitions on closed ranges at FUDS are not a solid waste, and therefore cannot be regulated as a hazardous waste under RCRA.

EPA’s decision to place a priority on the policy comes as citizen activists are attempting to push EPA to resume an oversight role in a controversial munitions cleanup in Washington state at a former military base. A representative of Columbia Riverkeeper and the Rosemere Neighborhood Association filed a formal petition Feb. 3 with EPA Region X requesting that the agency list Camp Bonneville, WA, a BRAC Army base that was a so-called “early, dirty transfer,” on CERCLA’s National Priorities List to ensure cleanup standards are met at the site. In an interview, the petitioner said a federal entity such as EPA, rather than the state, is best suited for putting adequate pressure on the Army to produce enough resources to conduct a sufficient cleanup. The petitioner cites high levels of perchlorate, trichloroethylene and cyclotrimethylenetrinitramine, commonly referred to as RDX, at the site.

This source believes EPA under the Obama administration is going to take the lead on munitions cleanup projects in general. An EPA Region X source did not know at press time whether EPA would take such a lead, and acknowledged the agency had received the petition.

In an unusual move, EPA Region X in 2003 pulled out from overseeing the Camp Bonneville cleanup due to limited resources and Washington state’s increased oversight role at the state, as well as the agency’s long-time dissatisfaction with the Army’s management of the cleanup.